The annual Third Year Talks took place on Tuesday 29th May, so Bruno, Hannah and Isabel, as third year students had a chance of presenting their work. The event, sponsored by Eli Lilly, involved 38 students from TCD, UCD and DIT who presented their research in the Hamilton Building on the Trinity Campus.

Our congratulations go to all the students who participated, and especially to Bruno, Hannah and Isabel for their great job representing the TG group! 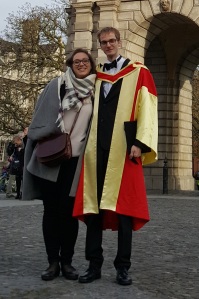 As part of the Autumn Commencements at Trinity College Dublin, Dr Sam Bradberry was conferred with his PhD degree in the Public Theatre.

Sam’s thesis, “Design and development of novel self-assembled luminescent lanthanide complexes in solution and in responsive soft materials” and the work that lead to its realization has been of great value for the TG Group, and we as a whole wish to congratulate him for his achievement. Great Job Sam!

4th Year PhD student Anna Aletti travelled from (surprisingly) sunny Dublin to the (exceedingly) sunny south coast of Sardinia on behalf of the group and attended the 13th Italian Conference on Supramolecular Chemistry held from the 18th to the 21st June 2017. Anna, who works on the design of anion receptors and anion-directed materials, gave an oral presentation of her work on interlocked [2]-catenanes based on the BTP motif and their anion binding properties, which was published last year in Angewandte Chemie with Dr Joseph Byrne (now at U. Bern with Prof. Martin Albrecht) and being continued in collaboration with Eoin McCarney, also a 4th year PhD student in the group.

She showcased the groups work and described the self-templated formation of [2]-catenanes from RCM of dimers formed from allyl-appended BTP ligands, which in their macrocyclic and catenated forms showed anion recognition properties.

The conference, organised by Claudia Caltagirone at the University of Cagliari and held on the beautiful Sardinian coast in Santa Margherita di Pula, brought together European and Italian researchers (of which the TG have a number both in the ranks and graduated from the group) from across Italy and some of those researching further afield. Anna, who studied at Università degli Studi di Pavia before arriving to the TG group, was reunited with a number of her former professors including Valeria Amendola and Piersandro Pallavicini, and continues to enjoy the interesting programme of talks from PIs and students of the Italian supramolecular community. (and the weather!)

Group Photo with all delegates (taken from supramol2017 website).

Aisling completed her two month summer project within the Gunnlaugsson group which she started on 6th of June and finished on 29th of July 2016. She has been an excellent addition to the group and has been working on the synthesis of tripodal terpyridine-based ligands for the formation of supramolecular polymers and gels with Sachi and Oxana. We wish her the very best of luck in her future studies and endeavors!

Homemade thank you card from Aisling

The Gunnlaugsson Group attended the Supramolecular Chemistry Ireland half-day symposium in NUI Maynooth organised to great effect by Dr. Rob Elmes, who obtained his PhD from under Thorri’s supervision and who is now a Lecturer in Organic Chemistry at the university. The attendees were treated to a tour-de-force of supramolecular chemistry developments from the islands of Ireland and Britain and from as far away as Universidad de Santiago de Compostela whence Dr. Miguel Martínez-Calvo made his return having carried out a post-doctoral fellowship in the Gunnlaugsson Group. Miguel spoke about his work on the “Development of new tools in chemical biology: specific transition metal catalysis in the mitochondria”. 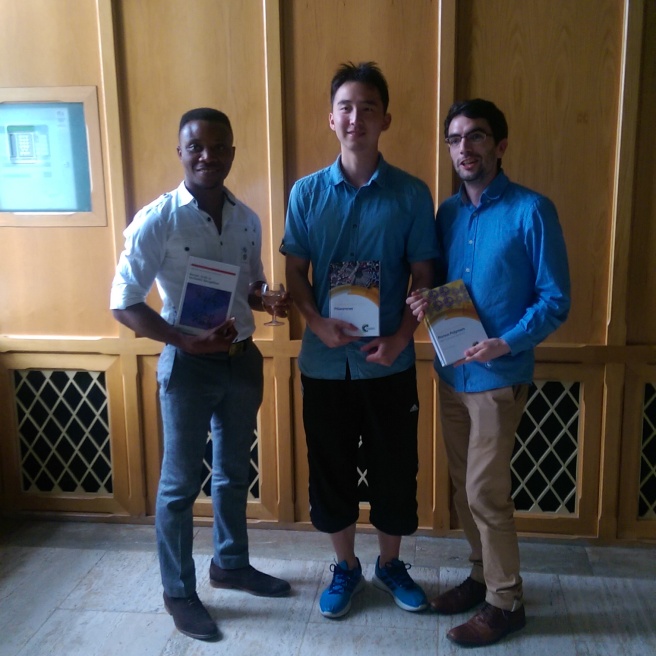 Dermot and the other poster prize recipients 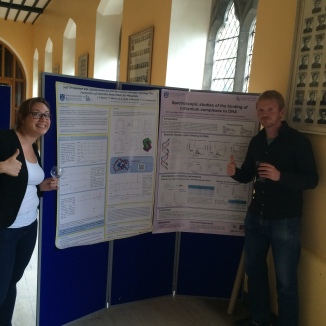 Anna and Bjorn at their posters 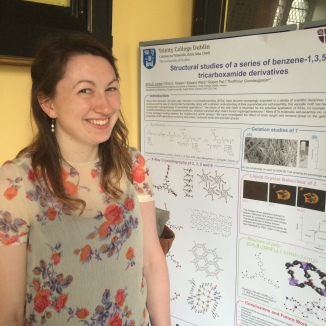 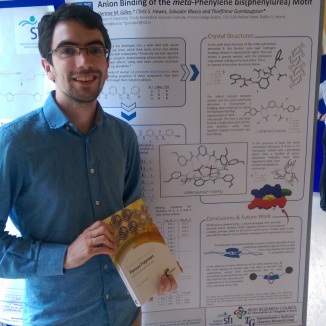 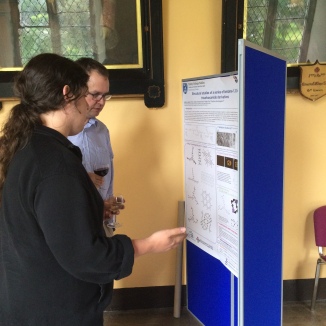 Chris at his poster with Prof. Phil Gale

A poster session followed the day’s talks where Dermot Gillen brought home a poster prize for his work entitled “Anion binding of the meta-Phenylene bis(phenylurea) motif“. Congratulations to Dermot and the organisers of the event which was a great success.

Students measure the concentration of aspirin in a sample of “blood plasma” with a UV-vis spectrometer.

Over the last few months, TG group member Dermot Gillen has been working with Dr John O’Donoghue – Trinity’s RSC Education Coordinator – to bring applied chemistry to secondary schools. As part of the RSC’s Spectroscopy in a Suitcase programme, Dermot has been helping Leaving Certificate students gain hands-on experience with state-of-the-art instruments that are used in both research and forensics. The students work together in teams, using chemical principles and portable spectrometers to find out what killed the unfortunate Dr Green!

After the case has been solved, students learn and can ask questions about undergraduate study in science, career paths in STEM and postgraduate research in Trinity, including the work of the TG group. This week’s visit to Loreto College was the last such visit before the summer holidays. Dermot, Olan and Joana had the chance to run the session themselves in what was a great success!

Dermot (far right), Olan and Joana with the girls from Loreto College.

A number of important and interesting conferences are convening in Dublin this Summer, highlighting a range of inorganic, supramolecular and nano-scale chemistry. 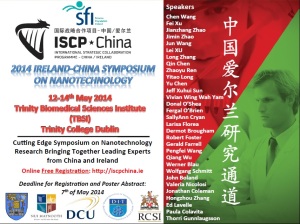 Further Details & Registration Links can be found at the ISCP Website.

“The Chemical Society of Japan (CSJ) and Royal Society of Chemistry (RSC) have collaborated on several successful joint activities in recent years including four symposia (2007 in Osaka, 2008 in Belfast, 2010 in London and 2013 in Kyoto).  As part of the symposium in London in 2010 an International Co-operation agreement was signed between the two societies. In 2014 the CSJ and RSC are organising a 5th Joint symposium between the CSJ and RSC in Dublin, Ireland on the topic of supramolecular chemistry. This meeting will take place before the start of the ‘Challenges in Inorganic and Materials Chemistry’ ISACS13 conference.”

Further Conference Details can be found at the RSC Website.

“Challenges in Inorganic and Materials Chemistry will be the follow-up event to successful conferences ISACS 3 and ISACS 8 held in 2010 and 2012 respectively, by bringing together leading scientists from across the world to share scientific developments….

…. This conference will bring together world leading experts from several disciplines and encourage the cross fertilization of ideas.  Extensive poster sessions will form a key part of the symposia and there will be questions after each talk.”

Conference Details, Invited Speakers etc. can be found at the RSC Website.

Chemists from Trinity College Dublin have achieved a long-pursued molecular first by interlocking three molecules through a single point. Developing interlocked molecules is one of the greatest challenges facing researchers, and the Trinity chemists’ achievement represents the first time three molecules have been linked in a non-linear ‘chain-like’ form.

Interlocked molecules have major applications in nanoscience, as they can be used as molecular shuttles and switches, and because they can function as molecular motors, mimicking the action of many biological systems.

Molecules that are interlocked together are unique in that they are not connected by any chemical bonds, which give other compounds their individual, defined structures following chemical reactions. Instead, the interlocked molecules typically exist as rings that together form a chain, like the pattern seen on the front cover of the iconic Book of Kells.

Led by Professor of Chemistry at Trinity, Thorfinnur Gunnlaugsson, the work was carried out by PhD student, Dr Christophe Lincheneau, who is now a postdoctoral fellow at CEA Grenoble. Dr Lincheneau used a metal ‘lanthanide’ ion called Europium and a catalyst developed by the Nobel Laureate, Professor Robert Grubbs of Caltech, to interlock three molecules through a single point. The important discovery was recently published in the high-impact journal of the Royal Society of Chemistry, Chemical Communications. It was also featured in Nature Chemistry’s April issue as one of three Research Highlights.

Professor Gunnlaugsson said: “This work opens up a new avenue for developing complex supramolecular self-assembly structures. The luminescent properties of the lanthanide were very important to our study, as they allowed us to monitor the self-assembly processes between Europium and the molecules in real-time.”

Europium luminescence is a powerful tool with wider applications. For example, it is currently being used to aid authorities in the prevention of counterfeiting, while luminescent lanthanide ion complexes are employed in the various denominations of Euro notes as red and green-emitting dyes.

Professor Gunnlaugsson’s research group, which is located in the Trinity Biomedical Sciences Institute, was also able to accurately determine the mass of their interlocked ‘[3]catenane’ by using the School of Chemistry’s state-of-the-art nuclear magnetic resonance (NMR) spectroscope and mass spectrometry facilities, which are part-funded under the HEA PRTLI Programmes. Their published research was funded by Science Foundation Ireland under the 2010 Principle Investigation Programme.

“We are now actively pursuing the development of other interlocked molecules and self-assembly structures using the lanthanide template design strategy we have developed and discussed in our recent publication. We hope this is just the first of many exciting and important discoveries,” added Professor Gunnlaugsson.